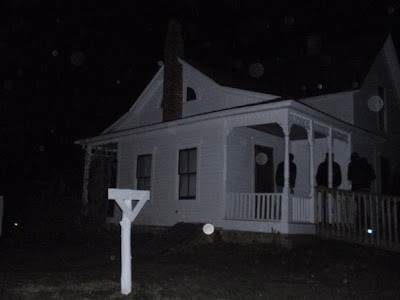 Background
For those that haven't heard the story - The Villisca Axe murders happened on June 10, 1912 in Villisca, Iowa, USA. 2 adults and 6 children were murdered in their beds and no murderer has ever been found. The house hasn't changed too much in the 97 years since the murder. In 1994 the Linns bought the property and restored it to its original condition and it is now listed on the national registrar of historic places. The house is now open to ghost tours. To read more click here for the official website. 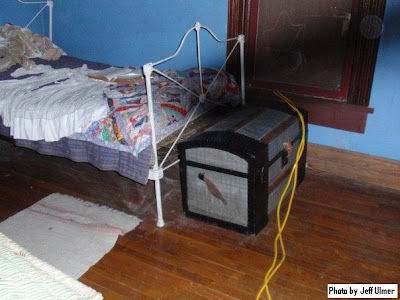 The Photo
Jeff Ulmer recently went to the Villisca Axe Murder House with AGH Nation for the Merry Axe-mas event. He experienced a few things there including hearing whispers in the blue room and a very low loud growl in the cellar but the most impressive piece of evidence is the photo taken above. Two minutes after walking into the house Jeff snapped a few photos, neither the photos before or after have this black mass in them. Interestingly enough the group that had gone in the room before Jeff went in had apparently been provoking whatever entity might be there to show themselves in the name of Jesus Christ. It seems it worked because when Jeff went into the bedroom he said he could feel the energy in there and snapped the photos. It's best to hear the story straight from the person who experienced it and thankfully Jeff did a video the same night documenting his experience.