Around 2000 years ago, in a small middle eastern country under occupation, a baby was born who was destined to change the world.
While many religions have mythology that ascribed their deities a virgin birth, this was the fullfillment of those myths. The deity was born of a virgin. A young girl from a lower working class family in a remote area who had been betrothed to a local carpenter. Her pregnancy was announced by a visitor who was not human and although her fate could have been death, she accepted the responsibility of carrying this child, who would be remembered as the Son of God made flesh.
The birth was as unassuming as it gets - He was born in a manger, surrounded by animals, straw, dung and the smell of earthiness. There was no midwife or nurse to hygeinically remove the afterbirth and weigh the child. He was born as children are still born in third world countries. 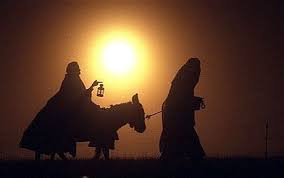 Although this birth was foretold by the prophets, it went largely unnoticed. Magi who had studied the stars and prophecies knew of imminent birth and travelled far to find the one they assumed was the King promised in myth and legend. Shepherds in the hills surrounding Bethlehem recieved a shock when Non Human Entities appeared proclaimed that the King of Kings had been born and that good news was coming to the earth.
And indeed, it was good news.
In his life, Jesus taught us to love our enemies and do good to those who hate us.
He showed that the Kingdom of darkness via which satan ruled the earth would be defeated.
He proved that the Kingdom of God was here and demonstrated power over sickness, death and the demonic spiritiual realm.
He included social outcasts in His life, showing that all people were equal before God and that everyone had a part in that Kingdom, as opposed to the one that the Romans ruled.
He was crucified on a Roman cross and rose from the dead to prove that in His death and ressurection was the power for the forgiveness of earthly sins, pride and idolatry and a hope that we could live forever with God after we physically die. That one day, all who believed would be ressurected and we would see our loved ones again in the presence of perfect love.
And then He left his followers, saying He would one day return - but He would leave a helper - the Holy Spirit, who on the day of Pentecost transformed a frightened bunch of fisherman, prostitutes, tax collectors and their colleagues into people of great spiritual power who did exactly what Jesus did - healed the sick, cast out demons and demonstrated that the Kingdom of God was here. They fed the poor, looked after orphans and widows, ensured that they shared all they had.
In the approximately 2000 years since those events, those who claim to follow Jesus have often brought great shame to the one they claim to follow. But they also changed the world. St Patrick did incredible signs and wonders and healings to lead Ireland to Christ, and deliver people from demonic oppression and pagan practices which included child sacrifice. Missionaries since that time who have truly been disciples have had countless encounters with oppressive spiritual forces all over the world, from idols that tribes claim demanded 90% of produce as an offering, to breaking the power of witchdoctors who sent demonic spirits of sickness over whole regions. While sceptics will scoff at that idea, when you hear the stories from people like Pastor Robin Swope and other colleagues, you realise this is a real power that causes great fear and loss wherever it is weilded.
This Christmas, our message is that this new Kingdom is available to all people. It requires a surrendering of being a slave to this current system that promotes materialism, consumerism, oppression of the poor and making ourselves God. It requires sacrfice, It requires loving others unconditionally. It requires humility. But it delivers us from evil.
I pray for all our brothers and sisters in the Paranormal "Industry" that they will be protected by the love and power of God through Jesus Christ this Christmas.
Will you pray and seek God's will for your life?
God bless you - Pastor Baz.
Posted by Bryony