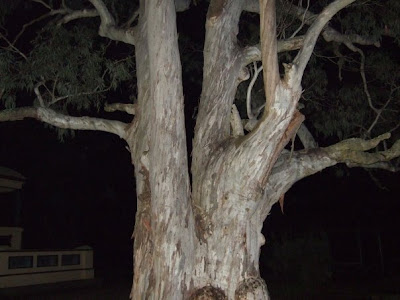 by Pastor Baz
The longer the night of the tour went on, the greater sense of sadness I felt at how humans treat each other. We had heard stories of murder, disease, legally endorsed racism and segregation (and the punitive action that followed any breach) and systematic police and military brutality of prisoners and convicts.

Which brings us to the hanging tree.

Chosen because of it’s sturdiness and shape, the hanging tree had brought, according to ‘Paranormal Pete’ many a sensitive person undone. People who were tuned in a little bit more than the average punter would put their hands on the tree and feel a sense of choking, smell, see and taste things that were horrific and see visions that were even more so.

One of our entourage named it the ‘boobie tree’ because it had two pendulous mounds near the base resembling…..you guessed it….boobs. (10 year old boys laugh….now!!)

As we rounded the corner to the tree, we noticed that school students were on a camping trip around and near it. Shannon and I will both confirm that the EMF (K2) Meters redlined as we came into the area – and the problem with these tours is that even though people have promised their phones are off that is not always the case. You soon learn what a mobile spike looks like on the meter and what is something different by the speed and the duration of the spike. This didn’t meet the criteria for a mobile spike compared to the previous three hours.

I felt the hanging tree was a sad place simply due to the fact that people were killed for doing things that in today’s society you would be given a good behaviour bond for. How many potential lives that could have been rehabilitated with the right type of Chaplaincy, mercy and support were ended at this tree? What happened to those who die in the prime of their lives, in traumatic situations who may be given a token Christian burial due to culture they live in but do not hear the good news of Christ and the Kingdom of God (in it’s true sense, not the hijacked, truncated, westernised fundamentalist sense) while alive. It is a question that further drives our research into this area and the need to provide well thought out answers to our readers.

As we drove off, the campers, unaware of the gallows they were bunked around and its history, text messaged each other, laughed and probably told ghost stories. I wonder if anyone experienced anything that night that was more tangible than the urban myths they scared each other with.

The next place we headed to were the convict wells. I had encountered these in my youth at Bowen Mt and although they had long been filled in, people still had strange sensations and experiences around them – a sense of ‘oppression’ that made a lot of people simply avoid the park, even though it was outwardly pleasant.

Pete warned us (again, this is great for the tour in terms of building expectation, but terrible for setting up false positives) of others experiences at the ‘wells’ including his own of being ‘pierced’ by an orb that told him to get out of the area, leaving him in a state of weakness, trembling and mental and emotional anguish, sitting on the ground, explaining his symptoms as anxiety rather than disclose what had happened at the time.

The wells were found down a dark bush track, renowned for suicides, usually via car and hose on the tail pipe. It’s interesting to consistently note how past dark deeds in an area continue to attract negativity, despair and loss of hope.

Essentially, the wells were holes dug in the ground to house convicts who were at high risk of escaping. All the way through the Blue Mountains and along the roads over the mountain and into the heartland of NSW were convict settlements of road workers, whose jobs were to carve roads into the new frontier (which was basically slave labour which resulted in hundreds of suicides for those who lost all hope) or simply maintaining what had been already created. At each convict outpost, those men who had life sentences or deemed a general flight risk were the ones placed in the wells instead of being allowed to live in huts with the rest of the community. This inhumane treatment now appears to leave a residual negativity over all the places this happened – what the negativity is I cannot say conclusively. But it is almost sentient, and at times exerts it’s will over others well and truly over a century later. As a Pastor, this leads me to a hypothetical position, based now on many personally documented experiences, that the ‘demonic’ realm feeds into and is attracted to the trauma of human tragedy, abuse and anger and unforgiveness. Is that what we were now experiencing at some of these places?

Our experiences were mixed but there was one consistent thing that happened. When the EMF meters went off, the frogs stopped their noises. It is a very similar experience in relation to wildlife that is reported around Yowie sightings and also noted in the appearance of UFO’s in regional area’s (I didn’t say alien, I said UFO which is what they are – unidentified flying objects). What we are looking for is the connection between the phenomenon manifesting and the reaction wild life has to it.

We took a lot of photo’s, got a lot of orbs (which most can be explained away as being dust or dew points) and in one photo of a water filled well a face of a person appeared to be present. This was later debunked by a TAPS forum member who showed it was matrixing from a reflection off the ground above it when the flash went off – and I agreed with that assessment. We have to be really careful in this area not to get caught up in the hype and the excitement, only to be the one’s responsible for ensuring skeptics have a reason to remain skeptical.

So after a long night of history, interesting experiences and personally, much prayer, we bid our new found friends farewell and arrived home at 1am to watch the Kangaroo’s play France, but the set top box refused to work. Shannon and I imbibed in a VB longneck together as we debriefed the night until 2am.

It had been a huge learning curve and we look forward to sharing our next adventure with you.