Bowen Mt – one of the world’s most mysterious places 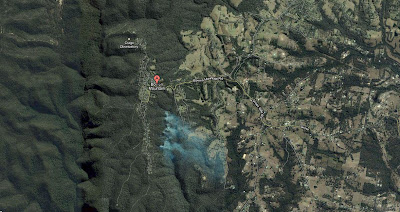 I have lived in a place called the Sutherland Shire now for around 20 years. It is a place of sun, surf, sport, leisure – and the occasional race riot (remember Cronulla in December 2005?).

But from 1978-1988 I lived around 70km north west from the beaches of Cronulla at a small mountain top town with not even a shop or a school on it called Bowen Mt. It is around 20km from the Richmond RAAF airforce base and has an interesting history and a myriad of fortean phenomenon and high strangeness.

Because I ended up marrying the girl across the road at Bowen Mt, we still regularly visit the area to see our in-laws, so I get a lot of opportunities to interview, investigate and revisit the stories from my childhood. Among the strangeness were:

- One one side of Lt Bowen road, from the bend in the corner where the Bowyer Family originally lived all the way to to Maple St, convicts were seen and heard re-enacting their daily grind that according to rock carvings started in 1809. The sights and sounds of horses, carts and hard labour were repeated regularly where an old trail ran parallel to the existing road – even 200 years later.

- The Bowen Mt Park has always had a strange coldness and eerie sense about it, which is noted by many of the locals. There are convict wells in there that are now filled in, but first hand accounts of giant orbs of light as big as basketballs, moving through the air and literally chasing people out of the park have been reported by reliable and multiple witnesses.

- A Yowie (Australian bigfoot) was seen on Maple St in the early eighties and is thought (though not witnessed) to be responsible for house shuddering wall banging at the time of the sighting.

- Black Panther sightings are common in the area, with animal carcasses and paw prints adding to the already long list of evidence.

- A ghostly figure appeared in the room of a young boy in the mid eighties in a house adjacent to Maple St.

- Neighbours reported that ‘The ghost of Lieutenant Bowen” visited all new arrivals to the town. (This is urban myth and we did not experience it, but it is an interesting folklore).

- When an aboriginal stone was dug up and placed in a house, unusual sickness and poltergeist and UFO activity occurred in and around the premises.

- Seasoned locals who would walk 20k through bush in the daylight and knew the area back to front would go for walks at night time along Lt Bowen Rd and return ashen faced declaring ‘they would never walk around this area at night again” explaining an unknown dread had stalked them as they walked the dark and unlit streets.

- Front doors would fling open suddenly with no one there, especially at dinner parties and gatherings when there was no wind or problem with hinges or hanging. And I can vouch that it wasn’t us kids – we were as terrified as the rest of the adults when it happened.

- Magnetic Hill is between Carters Rd and Grand View Lane. Long considered to be an urban myth or illusion, Shannon and I stopped his 2 tonne SUV a the point where the hill is undeniably on an upward slop – and after he took his foot off the brake we rolled 3-4 feet UPHILL. I was highly sceptical of the whole phenomenon until that point and I have no explanation for it.

So there you have it, and they are only the stories I know of. How many other true tales exist amongst the community of Bowen Mt, NSW Australia.
Posted by Bryony