Is there a spiritual side to tattoos?

It is written in the Levitical laws for the nation of Israel (Leviticus 19:28)
"You shall not make any cuttings in your flesh for the dead, nor any tattoo marks on you; I am the Lord".
What exactly were these marks for the dead - and what defines a tattoo?
Tattoo's have been used by people over thousands of year for many reasons, and in particular religious and superstitious reasons.
In the time of the ancient Israelites the Amorites used to cut theor flesh when somebody died. Also the Egyptians that were their (ie Israelites) slave masters used tattoo's ceremonially to worship and invocte their deities. Other nations tattooed images and representations of their gods or symbols to ward off evil and curses. To to take the mark of an idol was to show you were that gods servant.
Tattoo's have tended to have less spiritual meanings in recent times but also tend to remind oneself of a memory, an event, a career or a loved one. Since the times that naval sailors found the art of tattooing in the Pacific Islands hundreds of years ago, it's popularity has grown, first with sailors and military, then with "lower classes" and now in the 21st century, it is an extremely popular form of self expression. It can be a thing of great beauty and a thing of downright ugliness depending on the design, the artist and the viewers perception.
I myself have multiple tattoo's, although many Christians would disagree with that fact. But I am not here to be pro or anti tattoo but to look at the spiritual side.
The first thing that we have to look at is whether it is still a form of idolatry and giving service or placing yourself into the service of other gods.
I'll answer it with a real life example: When I was 25 my god was surfing. It was all I did, all I thought about, all I read about and all I watched. It was even by secular definitions an idol. 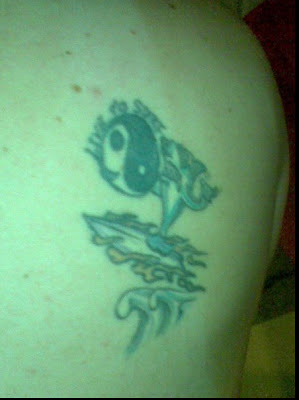 I wanted to be so submitted to surfing that I got a tattoo that says "Live to surf" and has an image of a shark with sunglasses on, standing on a fiery surfboard and holding onto a yin and yang symbol. What my tattoo symbolised is where my heart was and therfore became the god I worshipped. Every day it is a reminder of who I was before I found out that the only worship worth giving was to the true and living God of the Bible.
Is that the same as having a sports team, a loved one's name or your favourite activity tattooed? It depends on where your heart is. If you have no relationship with God, then chances are it's an idol. If you do have a relationship with God, how is that going compared to the item you have tattooed in terms of priority?
What about Christian tatttooes? I have five. Does that make it right? Is it a representation of who I serve and who I have submitted myself to?
And darker themes? Tattooes with demonic images, Pacific Islander tatt's with Tiki's in them, Yakuza style Japanese tatt's.
Images of Ned Kelly, Southern Crosses and rebellious statements against law and governments? Gang tatt's with guns, knives, symbols and mission statements.
I have often wondered if those images align us with things behind the images of a spiritual nature. Is it life imitating art or art imitating life?
Or is it no different than wearing images on a tee shirt?
I find this a very interesting subject. One man, of Maori descent whom I used to see walking up the street in Cronulla had the word 'satan' tattooed on his forehead and upside down crosses on each cheek. Part of me feels this was his way of stating how evil he was (or wanted to be portrayed) in the mongrel mobs back home in New Zealand rather than being a practising satanist. But is the pursuit of evil the same as being a practicing satanist anyway? I used to see him in later years in a suit and a tie with a long fringe over the tattoo!!!
One thing is certain, just like the quote "where your treasure is there is also your heart", I would suggest that tattooes say a lot about where our hearts are and what we worship.
I'll leave it with a statement from the owner of a tattoo parlour in Broadbeach QLD. 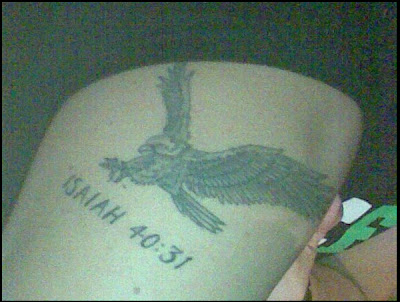 I was getting a tattoo of an eagle with the scripture Isaiah 40:31 underneath it, symbolic of that all who put their trust/hope in the Lord, will have their strength renewed and mount up as if on the wings of eagles. On his walls were some of the darkest demonic images I have ever seen.
"Mate, do people actually get those done"? I said through the buzzing of the tattoo gun.
"Yeah" he replied "I don't know how they sleep at night. Imagine getting up to go to the toilet and seeing that on your body in the mirror".
"Do the images ever creep you out"?
"Yeah they do, but that's what people want so I deliver them the goods. But I hate having them up there".
So the question remains, like the ancients who wore tattoo's of their gods and idols to proclaim allegiance to them, can our tatts proclaim allegiance to entities and does that allegiance make it easier to access our lives?
That's not rhetoric, I would actually like people to put forth their opinions.
God bless you - Pastor Baz.
Posted by Bryony