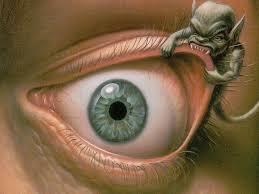 One of my best friends is a Lebanese Muslim and he has had a very colourful life.
In his younger days he was involved with gangs and the fast life. He has been stabbed, shot and even survived an aircraft crash.
But it's some of his real life stories about the paranormal that are even more interesting.
We were talking this week when he said "I have some stories that if I tell you, you won't sleep for a week".
So of course, I asked to hear them :)
"In our religion, like in the Christian religion, we believe in the devil. And we believe if you have sin in your life then the devil can control you. Do you think drugs can allow the devil into your life"? He asked.
I thought back to a conversation I had with my mother, who is a psychiatric nurse when I was twelve. She said to me "Don't ever take drugs or get drunk - when you do you can open part of yourself up to other spirits. The wards are full of people who have taken drugs or gotten really drunk and it has allowed something else to come in and take over. You don't see it unless you work in the hospitals but it's more than just mental illness".
And in a story for another time, I think she was right after an experience that I had in Noosa a long time ago where after a huge night on the drink, something else stepped in for a little while. It scared me so much I have never been drunk since. (Also purchase Robin "The Paranormal Pastors" latest book "True tales of the unexplained" on Amazon for some very similar real life stories about drugs and demonic stuff that lingers after the experience).
"Let me tell you a true story" He continued.
"Me and my mates went out for a big night at Kings Cross (notorious Sydney party district) and my mates were doing heaps of coke. Anyway, here we are, dressed up at the nightclub and two of my mates go to the bathroom, one only a minute behind the other. When my second mate gets into the toilets, the first one is crumpled on the ground covered in blood. There were doors broken, mirrors smashed, blood on the ceiling. The second guy grabs the first and says 'who jumped you, who jumped you' and the guy on the floor said 'no-one' I walked in here and something grabbed me and flung me against the wall, then pushed me up on the ceiling, then smashed me into every corner of the room. There was no-one here".
"That was the devil, because in our religion taking drugs is a sin, and when you sin, the devil can control you. And that is a true story, there was no one else in the room".
Drugs of all kinds have been used for millennia by cultures to induce a state in which people can have religious experiences and communicate with the spirits. What makes us think that just because our culture uses them recreationally that you won't have a similar experience.
My friends has many interesting stories because the Muslim culture is open to talking about spiritual things and I will be posting them here in the coming weeks.
A question I have is, can pharmaceuticals and caffeine have a similar effect? How do you discern between drug induced psychosis and a real spiritual event? Obviously in this case there were physical signs that something had happened that was very interesting?
And what does God have to say about this?
I think He speaks to us through his apostles in the New Testament verse of 1 Peter 5:8
"Be sober, be vigilant, because your oppenent the devil, as a roaring lion, doth walk about. seeking whom he may swallow up..."
And our response?
To stay sober minded by not allowing things to make our mind less than sober like the abuse of drugs and alcohol open up a channel to the devil and to give our 'heart, soul, mind and strength" to the love of God..
Because for a believer, our body is the temple of the Holy Spirit. But all temples have doors which can be opened if not guarded well.
God bless you - Pastor Baz.
Posted by Bryony