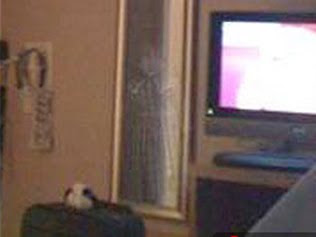 "A PHOTOGRAPH of a ghostly figure weeping in a hotel mirror has been dubbed a fake by News.com.au readers.
The image of a young girl was reported to have been taken by “hysterical” guests at the Ramada Hotel in Watford in England, who immediately reported the sighting to hotel staff.
The room was said to have been locked by hotel bosses after seeing the spine-tingling image, so no one else could stay there, The Sun reports.
But News.com.au readers say the photo was created by an iPhone application, which allows users to place ghostly images into photographs taken by the phone.
“This is fake – it’s the ghost creation program on the iPhone,” Gary posted."

GhostTheory Ghost Photo- Can You Identify The Location?

"Alright gang. Time to put your thinking caps on.

I received an email from a couple who are in possession of a strange photograph. The photograph purportedly shows some type of anomaly (or do I dare say ghost?). They did not take the photograph, but was given to them by a friend who works in a photo lab. The friend had come across this photo and thought it was a bit odd. So she copied it and showed it to them." 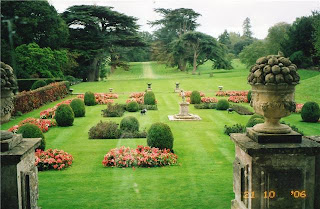 
From Bry: I commented on the website to say I think its a reflection on glass as in the top left corner there is another anomoly/reflection.

"A QUEENSLAND film student has launched a search for a man to play the yowie in a movie about the mystical ape-like creature rumoured to roam the Australian bush.
The casting call for the short film, called The Yowie, states the successful applicant should be tall, powerful, hairy, physical, a "Bigfoot" and aged between 25 and 55.
Perhaps our very own hairy Hollywood star Russell Crowe could take a paycut and step in to the role, or un-manscaped local talent such as Titans prop Brad Meyers or Wolfmother guitarist Andrew Stockdale.
Griffith University film student Col Bayford, 23, said the script was inspired by sasquatch stories in his native Canada and adapted to tell the tale of the Australian yowie."

Examiner It followed him home 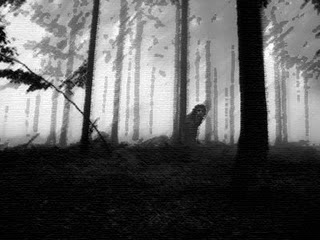 "Eladio was a young boy when it first happened to him. He was roaming the thin forest of the woodland next to his home in the outskirts of Alberto Oviedo, Mexico when he first encountered the thing that lived in the large pile of rubble near the swamp.


He was hiding from his older siblings in a version of hide and go seek when he ventured deep into the dark woods surrounding his neighborhood. He did not understand why the rubble lay in a pile by the swampy land, but he knew that his brothers would hate the stench that the putrid waters wafted upon the air in its surrounding areas, so hiding here would prove to be the best way to beat his brothers at the game once and for all. Even though he had to put up with the putrid odor for just a little while.

But as he sat there hunched over in a pile of boulders which in elder days had been the building blocks of a great temple, he felt something was amiss.

Something was watching him."

"A GERMAN UFO expert has claimed that a NASA spacecraft may have been hijacked by aliens - who are now attempting to contact the Earth.

NASA installed a 12-inch disk containing music and greetings in 55 languages in case intelligent extraterrestrial life ever found it.

But last month the probe began sending back distorted messages from its location near the edge of the solar system that baffled NASA scientists were unable to decode, Mr Hausdorf says.

"It seems almost as if someone had reprogrammed or hijacked the probe, thus perhaps we do not yet know the whole truth," the author of UFOs - They Are Still Flying told Bild.

The signal from Voyager 2 - which takes 13 hours to reach the Earth - broke off fully on April 22.

The space agency has not commented specifically on Mr Hausdorf's comments, although it says the fault is likely to be a glitch in the probe's computer memory"