stuff.co.nz UFO Papers to be made public 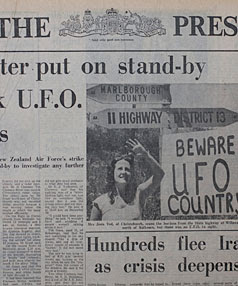 "Hundreds of pages of secret files on New Zealand UFO sightings will be released by the military this year.

The files include reports of UFO sightings from 1979 to 1984 and references to the Kaikoura sighting of December 1978."

"AMAZING footage of a UFO has been taken in Ireland - as The Sun re-launches the nation's X-Files.

A triangular formation of lights was filmed flying at night at "incredible speed".

Experts reckon the sighting near the River Liffey in Dublin could be a secret aircraft - or spacecraft." 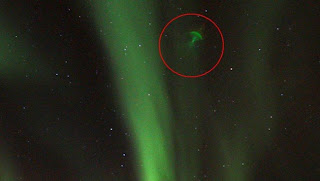 "On Jan. 20, 2010, Per-Arne Mikalsen was photographing a vast aurora erupting over the northern Norwegian town of Andenes.

Because solar activity is on the increase, aurora spotters have many opportunities to see the Northern Lights. On this particular night the aurora was intense, stretching toward the southern latitudes of Norway.

In one of the photographs taken by Mikalsen was an "object" that couldn't be identified. Although Mikalsen had taken several images at the same location, just one photo showed a mysterious green parachute-like object hanging with the main aurora. (This time, it appears that the Russian military was not involved in the making of this strange shape in the sky.)

At first it seemed easy to dismiss the object as a lens flare or a spot on the camera lens, but after further study it became clear that the answer wasn't that simple."