Some of the most exciting possibilities in Cryptozoology are the continued existence of species that once lived and have been deemed exctinct.
The thrill that they may still exist in small colonies in some remote area has captured the imagination of millions over the years (think Loch Ness, or the Dinosaurs of Arthur Conan Doyle’s ‘The Lost World’ ) as well as capturing the hearts of adventurers who actually live in pursuit of that very possibility – even to the ends of the earth.
Even though the possibilities are slim, it certainly enhances the chances of the sighting being real compared to that of a ‘non-classified’ species like Sasquatch, Chupacabra’s and other strange creatures that defy known zoological studies.
Sharks have long interested me.. They have existed from times that pre-date the Dinosaurs. Like Turtles, Crocodiles and Coelacanth’s they survived age old catastrophes that made millions of other species extinct and continue to dwell with us, albeit in a much smaller version, to this day.
Being a life long surfer, I have had my share of shark encounters – I was circled by two Bronze Whalers in 1992 at Forster, stalked by a Bull Shark in 2001 at Port Stephens, and had a 1.5 metre shark swim under me as I jumped in the water at Terrigal in 2000. But being followed by a ten foot Bull Shark on a surfboard is nothing in terms of fear and awe compared to an eyewitness account from 1918 in the area near Port Stephens NSW, Australia. 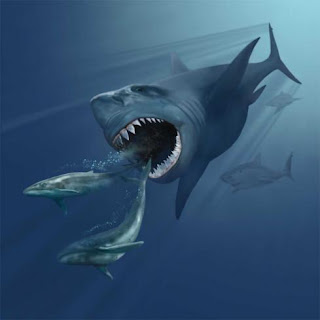 A few reports of alleged encounters with large, unidentified sharks have been proposed as evidence for C. megalodon survival. One of the most widely cited is an extraordinary tale recounted by Australian naturalist David Stead (1963: 45-46):

In the year 1918 I recorded the sensation that had been caused among the "outside" crayfish men at Port Stephens, when, for several days, they refused to go to sea to their regular fishing grounds in the vicinity of Broughton Island. The men had been at work on the fishing grounds---which lie in deep water---when an immense shark of almost unbelievable proportions put in an appearance, lifting pot after pot containing many crayfishes, and taking, as the men said, "pots, mooring lines and all". These crayfish pots, it should be mentioned, were about 3 feet 6 inches [1.06 m] in diameter and frequently contained from two to three dozen good-sized crayfish each weighing several pounds. The men were all unanimous that this shark was something the like of which they had never dreamed of. In company with the local Fisheries Inspector I questioned many of the men very closely and they all agreed as to the gigantic stature of the beast. But the lengths they gave were, on the whole, absurd. I mention them, however, as a indication of the state of mind which this unusual giant had thrown them into. And bear in mind that these were men who were used to the sea and all sorts of weather, and all sorts of sharks as well. One of the crew said the shark was "three hundred feet [90 m] long at least"! Others said it was as long as the wharf on which we stood---about 115 feet [35 m]! They affirmed that the water "boiled" over a large space when the fish swam past. They were all familiar with whales, which they had often seen passing at sea, but this was a vast shark. They had seen its terrible head which was "at least as long as the roof on the wharf shed at Nelson's Bay." Impossible, of course! But these were prosaic and rather stolid men, not given to 'fish stories' nor even to talking about their catches. Further, they knew that the person they were talking to (myself) had heard all the fish stories years before! One of the things that impressed me was that they all agreed as to the ghostly whitish color of the vast fish. The local Fisheries Inspector of the time, Mr Paton, agreed with me that it must have been something really gigantic to put these experienced men into such a state of fear and panic. 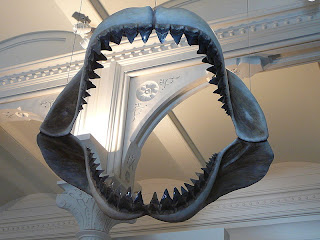 There is still much debate about what the crayfisherman of Port Stephens encountered that day. It could have simply been a Whale Shark or a Basking Shark as articles that have tried to debunk the story have suggested. But if the story is true, we have to ask ourselves why such salty old sea dogs were thrown into a state of fear and panic.
It would be extremely interesting to interview a family member who hear this story firsthand.
For full article see http://web.ncf.ca/bz050/megalodon.html
Posted by Bryony