Dailypost.co.ukDon’t be spooked by Gwrych Castle’s ‘ghost’
"
A HISTORIAN who’s spent his life trying to restore and publicise an Abergele castle has dismissed a paranormal investigator’s ghost story, fearing it may spook potential buyers.

Mark Baker spoke out after Kevin Horkin, owner of a management company for psychics, reportedly took photographs of a ghost at Gwrych Castle – which is in the process of being sold.

Mr Dorkin claimed the ghostly image appeared when he was downloading the pictures from his camera.

He plans to buy the landmark and turn it into a psychic retreat, adding that he has already submitted a bid in the region of £850,000.

However, according to Mr Baker, the castle is worth nowhere near that much.

He said: “To say that this is a ghost in Gwrych Castle, I think, is completely untrue.

“He’s claiming he’s paid nearly a million pounds for it? It is not worth that much at all.”

Mr Horkin has a professional interest in the paranormal and said he appreciates it may seem like a hoax.

“To many people, I am sure, it looks as if we are just trying to drum up publicity,” he admitted."

The field of journalism is going through significant changes as print and broadcast media are transformed by electronic media of various kinds.

Science journalism is no exception. Online and e-journalism, including citizen journalism, is changing not only media platforms but also content and focus.

Sometimes, this is perceived as, and generally acknowledged to be, a trend that has some negative aspects. However, parts of these changes are related to more vigorous coverage of topics that science journalists may have been covering inadequately.

Often sticking with safe and conventional science topics, some science journalists might have missed very interesting emerging developments in a range of scientific areas." 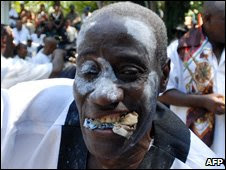 "A month before Haiti's devastating earthquake, prominent musician Theodore "Lolo" Beaubrun and a few friends were summoned by spirits who tried to warn them about the impending cataclysm.
"They told us to pray for Haiti because many people would die," says Mr Beaubrun - the frontman of the group Boukman Eksperyans.
"I thought it was about politics. I didn't know it was going to be an earthquake." "
To read more click here
_________________________________
Science and Religion Today The Religious Struggle Over Cryptozoology
"From Joe Laycock, a doctoral candidate studying religion and society at Boston University:

In 2003, Loren Coleman started the world’s first cryptozoology museum in Portland, Maine. Coleman’s International Cryptozoology Museum opened publicly in November 2009, and I recently made the trek north to see it. Cryptozoology—the search for animals not yet verified by Western science—is either a useful and legitimate zoological endeavor or a pseudoscience, depending on whom you ask. The media has focused intensely on the most legendary subjects of cryptozoology: the Loch Ness Monster, Bigfoot, and the Yeti. But aside from “the big three,” cryptozoologists claim a number of recent discoveries, including the woodland bison, the giant panda, the okapi (an African mammal related to the giraffe), and the coelacanth—a fish once believed to have been extinct since the Cretaceous period."