Enoch in the Rabbinic Legend

It was during the time of Jared, father of Enoch, that the angels, known as the Watchers came down to earth to take mortal women as wives and mate with them, and they beget monstrous children. Some of details of this can be found in the Rabbinic legend, the Haggada. Some of it resemble to the narrative found in the Book of Enoch. More detail about the Watchers and their children can be found in the book called the Book of Watchers, which formed the first part of the Pseudepigraphal Book of Enoch.

The leader of the Watchers was Shemhazai. He agreed with others to take women as wives, only if they sworn pacts to carry through this plan. Two hundred angels made the descent to Earth, at Mount Hermon. Two hundred angels were divided into group of ten, each under the leadership of chieftain or captain. Some of these fallen angels' names are revealed: Azazel, Armaros, Barakel, Kawkabel, Ezekeel, Arakiel, Samsaweel and and Seriel.

They defiled themselves on mortal women, producing monstrous children. Their children grew to be giants of three-thousand ells tall, which is approximately 3420 metres in height (11,250 feet tall). The wicked angels taught their children all sort of sorcery and arcane knowledge.

According to the Haggada (book 1, chapter 4 Punishment of the Fallen Angels), the angel Shemhazai lusted after a maiden named Istehar, however, she tricked him to reveal the Ineffable Name of God. Istehar used the Ineffable Name used to ascend, thereby escaping violation by Shemhazai. God rewarded Istehar for her pious and her chastity by commemorating her as the seven-star constellation Pleides.

In Genesis 4:22, Naamah was a daughter of Lamech and Zillah, and sister of Tubal-cain. She was a descendant of Cain, hence a Cainite. Apart from this, she was not mentioned again. In the Talmud, Genesis Rabba (27), this same Naamah was mentioned as the wife of Noah, the hero of the Flood, but according to the Book of Jubilees 4:35, Noah's wife was Emzara, the daughter of Rake'el; Rake'el being a brother of Lamech, hence she was Noah's cousin. However, the Midrash: Genesis Rabba 23, mentioned that the sister of Tubal-Cain, was the wife of Noah.

In most sources in regarding to Naamah, she was known for her great beauty; and according to the Haggada, her name means "Lovely" (Zohar 32 says that her name means "Gentleness"), though the name was used for her skills in producing sweet sounds from the cymbals. She was idol-worshipper.

According to the Haggada, Naamah was the opposite of Istehar, because the angel Shamdon had succeeded in sexual union with Naamah. Naamah's offspring was Asmodeus, a demon, instead of a giant (a Nephilim). Asmodeus appeared in the apocrypha Tobit.

According to the introduction of the Zohar, it was Naamah who first deceived and seduced the angels, not the angels seducing Naamah. Zohar 3 mentioned the angels, Aza and Azael, instead of Shamdon, they were victims of her beauty. She became mother of unknown number of demons, but there was no mention of Asmodeus. From this same chapter and passage of the Zohar, she was more than just a mortal woman. She would wander through the night and sleep with any man sleeping alone in the house during the waning of the moon, taking away their strength, like a succubus. So Naamah, like Lilith, became a demoness.

When Jared was 162, Enoch was born. Upon reaching manhood, Enoch lived alone in a cave, to avoid the wicked children (Nephilim) of the Watchers, when one day he heard a voice, appointing him as the scribe of justice. The voice told him to go to the Watchers and announced their fates and punishments for their wickedness for cohabiting with mortal women. Their offspring shall suffer for the sins of their fathers.

The giants consumed most of the food from men, before they began devouring ordinary people, and sucking their blood, like vampires.

Enoch was 65 when his son, Methuselah, was born. God had appointed Enoch as ruler and teacher. Hundred and thirty kings and princes had submitted to his dominion. He was known for his wisdom and justice. He was 243 when Adam died. There was a period of long peace while he ruled. But at this point in time, Enoch decided to retreat from the rest of mankind again.

On the last day, a giant steed arrived from heaven, to take Enoch away. After giving his final instructions to his people, he tried to leave. As he travel through the land, his people followed him. On the second day, he told them again to leave. Most obeyed, but six people continued to follow him. Enoch tried to persuade the last six people to leave him, or else they would die when he ascend to heaven. Still, they followed him, until the seventh day. A fiery chariot drawn by giant steed arrived from heaven.

The kings who obeyed Enoch to leave him, discovered the bodies of the six people who followed Enoch till the end. They seemed to have been killed by great hailstones. Enoch was taken to heaven on the same month, day and hour that he was born.

It was not the first time, Enoch was taken to heaven. Enoch had the great privilege to see every place at heavens on earth. Two angels, Samuil and Raguil, woke him, and escorted him to heaven. He was able to see each of the seven heavens and the angels who dwelled there, all the way up the throne of God in the 10th heaven. He also met the archangel, Gabriel and Michael.

Enoch was to be the scribe of God. From the book of heaven, Enoch copied down everything, filling 366 books about everything that happened in heaven and on earth. Enoch was said to have given these books to his sons.

The final time he was taken to heaven, he was transformed into an archangel, and his name was changed to Metatron. He was the prince of princes of angels.

After Enoch's disappearance, Methuselah took over the mantle of patriarch and "ruler of the earth", and was seen as a great hero in the Haggada, killing thousands of demons, who were offspring of Adam and the she-devil, Lilith; killed them all with his sword, which have the "Ineffable Name" of God etched on the blade. Methuselah captured Agrimus, the first-born of Lilith.


OTHER THEORIES OF WHAT NEPHILIM WERE:

1.Aliens
2.Giants
3.Not children born of angels but children born of rich leaders
4.Descendents of Seth (followers of God) and decendants of Cain who intermarry and their offspring were refered to as Nephilim.

Hoax photo of a giant skeleton: 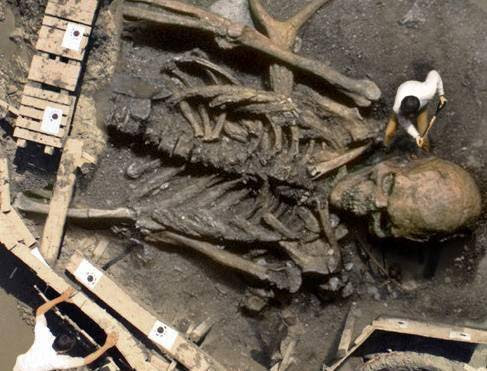 Genesis 6:4
The Nephilim were on the earth in those days—and also afterward—when the sons of God went to the daughters of men and had children by them. They were the heroes of old, men of renown.


Numbers 13:33
We saw the Nephilim there (the descendants of Anak come from the Nephilim). We seemed like grasshoppers in our own eyes, and we looked the same to them."