An apparition caught on film by PA. Dept of Paranormal Investigations

I read this on both phantoms and monsters and paranormal about.com 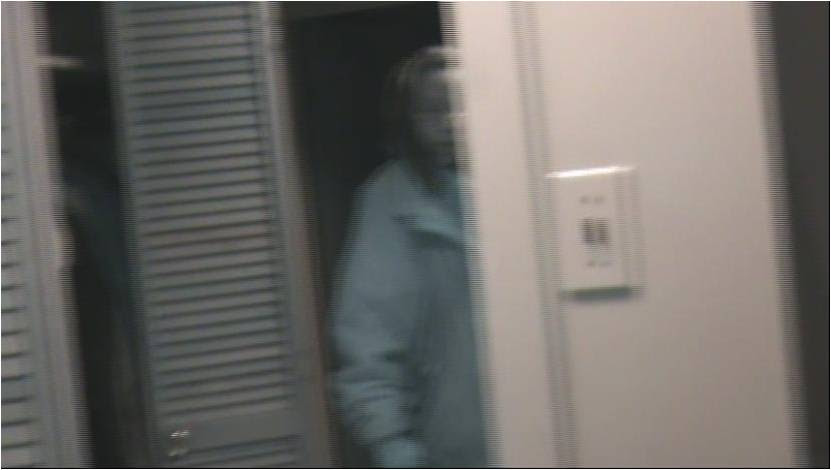 
"Apparition Caught By Doreen
http://www.youtube.com/watch?v=0qcLzVsy50Q
Investigator Doreen captures an apparition. She was up on the second floor of a home, she was in a room by herself when this was caught.

Barb King is the founder of the PA. Dept of Paranormal Investigations or PDPI, a non-profit investigative team based in the Pittsburgh, Pennsylvania vicinity. She describes Doreen Hill as "a strong investigator with good skills," then adds, "I trust her totally."

One evening in March, 2009, Doreen Hill and a handful of researchers from the Pittsburgh Paranormal Society accepted an invitation to investigate a rental property in East McKeesport, Pennsylvania.

The mother and her two sons living there felt threatened. The family witnessed shadow phenomenon in the stairway leading to the second floor. Vile odors wafted through the residence. They began sleeping on the living room floor before finally retreating to a relative's house since they did not have anywhere else to go.

When investigators arrived, there was a "TERRIBLE" smell in the home. They asked the tenant to check her refrigerator to see if maybe something had gone bad... nothing.

Doreen escorted the mother upstairs to escape the stench, shoot video, and maybe run an EVP. Being somewhat "sensitive," she was drawn to a bedroom currently being used for storage. The mother returned downstairs to be with her children and to check on what everyone else was doing.

Doreen shot some video without incident.

Routinely checking what her Sony Handycam Hybrid DCR-SR45 had captured, her eyes more than likely popped out of her head reminiscent of some 1940's animated cartoon. "


Putting a video like this out there for the public to scrutinise is a brave thing to do. People love tearing things like this apart. I'm going to try and look and look at this objectively.


My first question... who's feet with shoes on were they right at the beginning of the shot? Doreen couldn't have been alone in the room as claimed.

Comparing a photo of the lady/ghost and Doreen, there are similiarities but not shockingly so... (I got this photo from the teams website) Could it be the reflection of Doreen in a mirror?


"Doreen says, "As far as the colors I was wearing....I know for a fact that I was wearing a black shirt with white lettering and jeans. The shirt I was wearing was the shirt I wore when I was with Pittsburgh Paranormal Society." This is no reflection or accidental capture of any living person present in that dwelling. The family is African American. No one in attendance dressed in the manner of this apparition. This is no orb or pareidolia. "


I would like to see photos of her and her other investigators from the investigation showing what they were wearing on the night.


The lady/ghost to be fair doesn't look like she is holding anything or panning a camera around but could it be the other person in the room standing there? (the persons who's shoes are seen at the beginning of the shot?)


Someone on youtube points out that it looks like light reflecting off the ladies/ghosts forehead making it appear as a solid form and not very ghost like.


I can't say for sure whether this is paranormal or not and its not my place to. I think its important to question everything though and yes, there are many questions to answer with this photo.  If you are putting a photo into the public forum it is to be expected and is not necessarily a bad thing as long as people aren't horrible to one another.


I'm looking forward to seeing if anything else comes forward from this group in regards to the photo.


Until then, I will strive to keep an open mind.
Let me know what you all think in the comments below.