The Wall of Fear 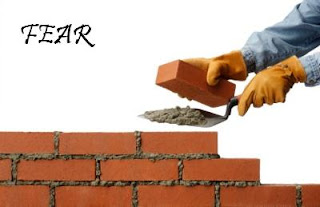 Have you ever felt a ‘nameless dread’?

A feeling that you can go ‘this far but no further’ in a room, a building or in the outdoors?

Do certain area’s make you feel anxious and uneasy?

Have you heard of mountain panic, in which people literally feel the need to ‘flee’ when in certain remote regions, to the point where they are overwhelmed with the ‘flight’ response.

Some researchers attribute this to paranormal activity, some to psychology and others to infrasound produced by wind, electrical devices and other means (see web link to research article below).


I have had two experiences with this.

Once I was riding my brothers mini bike when I was 11. It was a Honda Z50-R, a year old and in great condition. I was riding up a hill at Bowen Mt, with the other riders 1km behind me. And as I went up a hill in 3rd gear at ¾ throttle, the bike just cut out. It just died.

I got off the bike, and as I tried to kick start it I was overwhelmed with a sense of fear and of being watched. I started hyperventilating. The bike would not start. There was no reason to be scared – I was only 500m from home and my family was right behind me.

But it was a sense of dread beyond rational understanding.

I sat on the ground crying. When the adults got to me I was a mess and said the bike wouldn’t start. They kicked it over and it started first go. It was a very unnerving experience where both electrical/mechanical failure and a sense of foreboding were absolutely enmeshed. Was it just a coincidence?

The second story comes from a hunting trip at a place called Manildra. We were asked by the local farmer to cull Kangaroo’s that were destroying his crops. It provided us food for the camp as well.

One afternoon, we came through a new section of the property that was unlike anywhere else. It just felt strange. The tree’s were strange, the rocks were out of place and it felt like no-one wanted to be there – that was the vibe for everyone in the car. It bordered right onto the National Park.

That night we ended up spotlighting in that paddock, and it was pretty fruitful.

As my son and I got out of the car to get a carcass we just shot from 50m away we were confronted by three strange things. One, the carcass had completely disappeared. It was in plain site when shot, we followed the lights to the carcass and it wasn’t there and we had seen it drop like a stone. The second thing were a set of eyes reflecting from behind the fence that were coming from the national park, that were low to the ground like a large snake would be, but with no discernable body, were reflecting off the spotlight the whole time we were looking and watching us. The third was, as my son and I walked toward the fence we hit a ‘wall of fear’. We simply could not go any further and it happened simultaneously. Our legs became like lead and we looked at each other as if to say ‘I can’t move forward’. Our driver was a seasoned bushman and he said “Stop being a pack of girls and go get the ‘roo”.

After a minute he jumped out of the SUV, and as he got to us, he too hit the ‘wall’ and stopped exactly where we were. He went forward, and came back rattled. “It doesn’t feel right here at all, let’s get back in the car and keep going” he said. We jumped in and all feeling very uneasy and even nauseous (my son and I) so we drove 150m to the gate and into the next paddock. Not only had the scenery completely changed but the vibe was totally different. So three individuals had the same unnerving experience at the same spot at the same time.

Was it a psychological response from being uneasy there earlier in the day? Or was there more to it?

We immediately named it the ‘Yowie Paddock’ because of the nameless fear some researchers have attributed to the phenomenon that is implied to occur often when a sighting of a report is made, of the symptoms suffered by the interviewee.

Here’s a question that is difficult to answer. How do we discern between what is real, what is implied and the source of the ‘fear’ – is it an internal physiological factor or it is a response to an external source projecting it, mechanical, electrical, naturally occurring, or otherwise?


Check out these links to investigate further and here is a scripture for you in regards to fear and worry from the Gospel of Luke, Chapter 12:

“..Which of you by worrying can add a cubit of height to his stature..” Jesus.

For more information on the fearful symptoms linked to Yowie sightings go to:

Excerpt below: (Interview OF Paul Cropper by AYR )

[AYR} - This is normally a question many Researchers try to avoid, however we have to ask it. There's been so much talk by many Researchers on a World level about the Yowie/Bigfoot having some form of ties in the Paranormal, what's your view?

[Paul} - There are certainly 'psychic' elements to some sightings; strong feelings of terror and panic (the 'nameless dread" as Tony Healy likes to call it), dreams and nightmares before and after sightings. The aboriginals incorporated some paranormal elements into their hairy man stories. I'm an unapologetic fence-sitter on this - I recognise these elements do exist in some reports, but I feel it's a backward step to use one mystery (psychic phenomena) to try and explain another. Lets wait until more information is available.

For more information on mountain panic go to the link below.

For more information on infrasound go to the links below.