The word sinister means 'threatening, portending evil, harm, trouble or ominous'. We hardly ever use the term anymore. But it sums up the encounter you are about to read about.


The best stories you hear are the one’s you never expected. Last week I was having lunch with a sports chaplaincy colleague who was an Australian Spearfishing champion. He was so good he even won contests while his broken leg was in waterproof plaster. In 2007 he had been severely injured in a boating accident and lost the use of an arm and a leg and became a follower of Christ while in hospital recovering, having an amazing encounter with God. The Doctors said he should be dead many times over but here he is today, speaking around the state and country and being interviewed on TV.

We were discussing a lot of things when he asked me about experiences with the paranormal. Then he dropped a bombshell. Very strange things were afoot at his fathers house in Cronulla, only a kilometre down the road.

“At my mum and Dads house, they keep seeing someone walking around. At first they didn’t want to mention it to each other – in case the other thought they were going mad. Then they raised the subject – they had both been seeing a person darting through the house, going into rooms – but not like an intruder. They then asked each other if they had been ‘slapped’. They concurred that someone had slapped them across the face when no-one was around. Dad’s sister then said when she slept over, she was slapped across the face while in bed”. 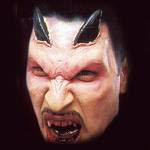 “But it get’s worse. One day dad was asleep on the lounge and he woke up and couldn’t believe what he was seeing. He actually checked to make sure he wasn’t dreaming. A man stood in the corner of the room, in tights that at his shoulders became a hood that went over his head, but you could clearly see his face. The weirdest thing was, the hood actually was made to sit over two horns coming out of his head. The man had a smirk on his face, like he was saying ‘I have you now, I’ve got you now’. Dad was so scared he actually crapped himself, he had a bowel movement. In his fear he did something he was told as a child in the Greek Orthodox Church back home, to pray to Jesus for help. So he made the sign of the cross and in Greek said “Jesus help me” and whoosh, the guy just disappeared.

It’s tempting to go ‘right, let’s get down there and investigate’. But sometimes a lot of prayer is required. This realm is full of deception, anger and malevolent intent. Our team is going to stay in touch with the family while simultaneously praying and seeking wisdom from the scriptures. When you read books like 'The Demonologist' by world famous exorcists Ed and Lorraine Warren (Original Amityville Investigators) you realise that there is nothing like knowing you are spiritually covered during an investigation to protect you, your colleagues, the people you are helping and at times, your own family at home. The dangers to your emotional, spiritual and physical health are very real and only Jesus Christ has authority over the realm, as testified again and again in interviews.

Once again, we’ll keep you posted on this one as more information comes to light
Posted by Bryony