Bizarre In The News - Another Bigfoot video

Is this Bigfoot caught on video? 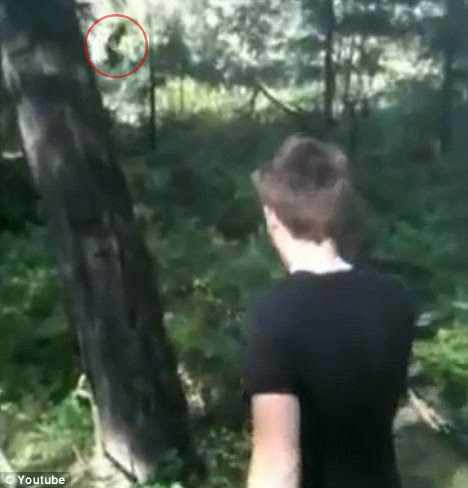 
A woman hiker got the fright of her life after she went walking with a friend in Spokane, Washington, and stumbled across what she claims is Bigfoot.
Samantha, who has not revealed her surname, caught the footage in Downriver Park with her iPhone camera and posted the video on YouTube.
After capturing the mysterious creature, also known as a Sasquatch, on film, her YouTube video has become a hit and has already been viewed almost 8,000 times within four days.

In her post, Samantha said she didn’t realise Bigfoot was there until she replayed her video after the hike at home.
She wrote an email to KXLY news website in the US, and said: ‘Someone asked me in the comments section if I believed in Bigfoot before the video.
‘I have never given it much thought, but now I’m not so sure. Seem real enough to me.
Read more: http://www.dailymail.co.uk/news/article-1391825/Is-Bigfoot-caught-video-Hiker-swears-really-HAS-caught-time.html#ixzz1Nnpw1b56


Why i doubt this is bigfoot:


"Bigfoot" wasn't noticed until she watched the video back later. Surely someone in their group would notice Bigfoot walking in front of you?


I looked up the park and its near a quite populated area. Next to a college, golf course etc. Isn't it a little too populated/busy for a Bigfoot to be walking around in broad daylight?

It seems to me that it is just someone taking a short cut through the park. Admittedly they are walking in quite a hunched/odd way. Could it be a hoax? Someone in costume? What are your thoughts?


Who am I to say if its been faked, case of mistaken identity or what? I just offer my humble opinion and would love to hear yours.
Posted by Bryony