Dragons - Where does the myth end and real life begin?


There are stories from all over the world that involve dragons. This week i'll focus and show you two stories from around the middle ages in the western world and then in a couple of weeks I'll focus on tales of dragons from the East.


The two stories that stick out in regards to medieval times are The Lambton Worm and St George and the Dragon.


Both written off as fiction, the stories themselves are pretty interesting. 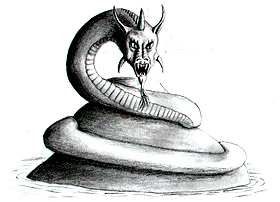 The Lambton worm is a strange tale about John Lambton who finds this bizarre creature and is warned its a bad omen. He's told "It bodes no good for you but you must not cast it back into the river, you must keep it and do with it what you will."
Of course as all these stories go, Lambton ignored this advice and through the worm in a well that was on the way home.
Years went by and John was away fighting the crusades.  The worm grew and grew, the well became unstable and released toxic vapours. The villagers said the well was cursed and surmised that something otherwordly had residence in the well. The truth came out one day when they saw the worm "had slipped out of the well and wrapped itself three times around a rocky island in the middle of the river, a trail of black slime outlined its path from the well."
The worm is described as follows:
"The dragon had no legs or wings, but a thick muscled body that rippled as it moved. Its head was large and its gaping maw bristled with razor sharp teeth, venomous vapours trailed from its nostrils and mouth as it breathed."
The worm eventually went to the Lambton Hall and was abated by warm milk. This went on for a few years, when John Lambton returned from the crusades, heard the plight of teh village and decided he needed to kill the worm.
He went to see a wise woman who advised him "You and you alone can kill the worm, go to the blacksmith, and have a suit of armour wrought with razor sharp spear heads studded throughout its surface. Then go to the worm's rock and await its arrival. But mark my words well, if you slay the beast you must put to death the first thing that crosses your path as you pass the threshold of Lambton Hall. If you do not do this then three times three generations of Lambtons will not die in their beds."
The story goes that he killed the worm and as he was returning to Lambton hall his father rushed out to greet him.  John panics and asks the servants to bring the dog which he kills. But he hasn't fullfilled his oath and for generations the Lambtons didn't die in their beds.


The "worm" described in the story is how dragons are said to look like. The above story according to Wikipedia "is a legend from North East England in the UK. The story takes place around the River Wear, and is one of the area's most famous pieces of folklore, having been adapted from written and oral tradition into pantomime and song formats."


Now, for George and the Dragon, the tale comes from around the same time as the Lambton Worm story.

There are a few different ways this story is told. The basis of the story is of a dragon in a lake that required sacrifices in order to be appeased. First of all it was cattle, then when that wasn't enough it was children (picked by a lottery),  One day in the lottery the kings daughter was picked out and the King begged the kingdom by saying he'd give them all the gold and silver but the people of his kingdom refused the bribe. So the daughter decked out in a bridal gown went out to the lake.
At this point Saint George happened to be riding passed and spoke to the scared princess. She tried to make him go away but Saint George was having none of it and refused to leave her. Whilst they were talking the dragon appeared.  Saint George did the sign of the cross and thrust his lance into the dragon, wounding it.  He then put a girdle around the dragon and the dragon meakly followed the girl by a leash.
As they neared the kingdom, the people became terrified.  Saint George then said "Convert to Christianity and then I will slay the dragon".  They converted and Saint George killed the dragon.


According to some, this tale is an adaptation of Perseus and Andromeda due to similiarity in events and location.   Others say the dragon was controlled by Satan "The creature blocked the city's water supply and would only move if given a virgin sacrifice. Over time, all of the virgins were sacrificed except for the noble's daughter, and even she was sent to quench the castle's thirst. However, Saint George arrived at the last moment on his white horse, striking down the dragon with a spear between its eyes".


Like St Patrick and the snakes, many think that these stories about dragons/snakes etc represent paganism and the saints that went around and converted people to Christianity.


What do you think? Are dragons mythical representations of satan? Are dragon stories just ways of telling stories about the conversion of pagans to Christianity? Real life animals that are now extinct? Or a case of mistaken identity?
Posted by Bryony