It's a big call using a title like 'Yowie Town'. But in the case of Hill End NSW it is fairly apt.
For our international readers, 'The Yowie' is Australia's version of the Sasquatch or Bigfoot. 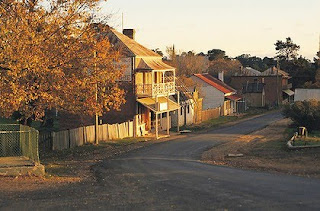 One of our team took the opportunity to visit the area last month. It was once a flourishing gold rush town, but now is like so many central western towns that rely on pockets of tourism to bring new life and commerce into town. Shannon and his friend were there for four wheel driving, without really thinking about anything cryptozoologically oriented. But they had two experiences that got them thinking about what lies behind the tree line in the local bush.

The first report that I recieved was that there was some strange things afoot in the bush. Not unexplainable via other means. But still highly unusual.

You need to remember as you read this that Shannon is the 'Yowie skeptic' on our team, simply due to lack of evidence.

But something in the bush got his attention. Very intentional tree rapping. Followed by a very human like scream.

Could this be explained by other animals, by some type of bird? Was it the wind carrying sound? Possibly. It's certainly not evidence. But it is consistent with other people's stories of the phenomenon including people I have interviewed.

The next situation was to discover that the local pub in Australia is a great way to meet people - and to hear stories you may never pick up in a normal setting.

Such as the National Parks and Wildlife worker who swears that she was chased by a very large, very aggressive bipedal (two legged) creature on the border of her property and the surrounding bush. An encounter that left her terrified. That was one of a number of stories that he heard that night.. Australian humour at it's best? Or was there substance to these stories. With the credibility of a Parks and Wildlife worker, it appears to carry more weight than many of the urban myths you are likely to hear over a schooner of amber liquid and a packet of salt and vinegar crisps.


Like many of our investigations which are underway, with the witnesses permission, and the help of other researchers that interview will be forthcoming in the next few weeks or months.

You get to analyse the information with us, which is the beauty of our group - we work with all researchers and share any information we have.


We'll finish on the note that Hill End in NSW had that reputation long before CCAPSG's Shannon went on a visit there last month. 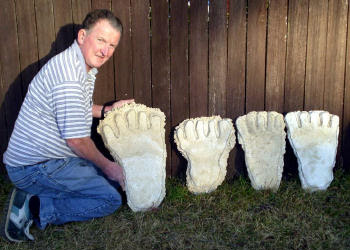 The Hill End district still remains a notorious region for modern-day Yowie reports, as will be demonstrated further on. Today Johnson's Hole still retains its eerie, uneasy feeling. Weird cries have been heard at night in the surrounding area, and large, man-ape like footprints claimed found in soil near the river from time to time.


One evening, around dusk, in 1990 a young Sydney couple on a camping trip, decided to stay overnight near the hole. They knew nothing about its reputation. During the night, something walked up to their small, two-man tent, and began tearing it from the ground. As the girl screamed, and her male companion fought his way out of the tent, he felt himself grappling with a dark hairy and putrid-smelling form that quickly broke off the attack and dashed off into the darkness


Miss M Hodge of Bathurst related an experience of her own to this author in December 1979 which concerned the Johnson's Hole area. When a little girl in 1900, Miss Hodge lived on her parent's property, which stood opposite the 'Hole'. Aborigines thereabouts never swam in the Hole and even today horses and dogs also will not remain near the Hole at night. Miss Hodge said she once saw a horseman who had been mustering sheep, ride all the way out of the hills "white as a sheet". He told her parents that he had seen a large 'baboon-like' man, a giant which had terrorised him. Miss Hodge herself saw a man-sized black-haired Yowie, sitting under a rock near her home one day. Old timers often discussed the possibility that the creatures might inhabit caves that lie in the hill surrounding the Hill End township.

One day in 1924, a Mr David Squires was kangaroo shooting in an area of open to thickly timbered country west of Dubbo. Having shot one big 'roo' on this particular afternoon, he was in the process of skinning it when, suddenly he became aware that he was not alone. Glancing up he was shocked to see, standing 10 metres away beside a tree, and with one huge hand resting upon it, a two legged male creature a good 2.6 m in height. At first he thought it must be someone who had "gone wild when he was younger", but the hominid's height soon dispelled that notion.


The manbeast appeared to be in splendid physical condition, and was covered with a thick coating of bluish-grey, coarse-looking curly hair about 8cm long. The body, arms, legs, hands and feet were in proportion to its height, as were the neck and head. Recovering his senses, Mr Squires slowly reached for his rifle, checked that it was loaded and the magazine full, and placing it beside him resumed skinning the 'roo'. "I finished that job with one eye while the other was watching the Big Bloke", he said later.


SEE YOU NEXT WEEK - Pastor Baz.

PS: Go jump in the 4WD and check out some of these area's yourself - let us know what you find.
Posted by Bryony