I met up with a friend last night who i've not seen in a couple of years since emigrating to Australia. She's an air hostess/flight attendant and she got a flight to Sydney so we met up. I took her to a bar and we settled in with a drink and got to chatting as old friends do.
She mentioned my interest in the paranormal and asked me some questions. She then told me a story that gave me goosebumps... 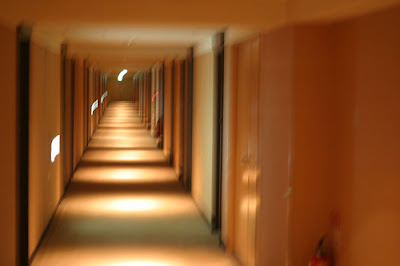 Her friend was staying in a hotel in London (I will try to get the name of the hotel) after a flight and having worked a shift she was tired and wanted to rest. She booked in the hotel and was settled in for the night when she heard a knock at her door. She got up, opened the door and no one was there. Shrugging it off she settled back down. Again, she heard a knock on the door *tap tap tap*. She got up, opened the door and again no one was there. She looked up and down the hall to see if someone was doing a knock and run. The hallway was empty.
Three more times she heard a knocking at the door and no one was there.
Getting tired of this she rang the hotel reception and told them someone was knocking on her door and running away. They told her they'd check the security footage.
They rang her back and told her there was a little boy who was knocking on the door. The thing is, when she opened the door the little boy went into the room! Of course she hadn't seen anything and was suitably freaked out and probably didnt have the best sleep that night!

I would love to see this footage! If anyone reading this has heard this story and knows which hotel it is I'd be very interested in hearing from you.

By Bryony
Posted by Bryony