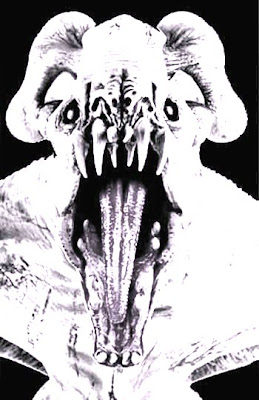 One of the most interesting phenomenon I have heard of is when people literally speak or think something into existence.
Ancient Tibetan lore speaks of the Tulpa, which can mean “to build” which is a being which has animation literally from thought and meditation.
In Nick Redfern’s book “Three Men Seeking Monsters” he considers the issue of Tulpa’s as being responsible for many sightings of creatures and phenomenon from UFO’s to Black Dogs and Alien Big Cats right through to Bigfoot.  His interviews led him to stories about ancient people’s who invoked beings not of our world, which feed on human fear and emotion and are still with us today, manifesting as the creatures and aliens that make up so many of our supernatural/Paranormal blog subjects today.
Redfern and his companions even talk about their own experiences in invoking through meditation and occult ceremonies red eyed sasquatch like bipeds in an English forest and spider like beings in a basement.
I have read stories of people having conversations about vampires on a lonely road at dusk only to be confronted by something in a tree nearby that resembled the exact being in their conversation.. The same applies tosome latter day Mothman and Jersey Devil experiences.. Is it just suggestion and imagination or something more frighteningly real?
There are a number of issues that come out of this concept. One is that it is incredibly hard to prove that anything was ever invoked. Two, it could be due to hallucinations, mental illness, drug use, fatigue or an overactive imagination. Three, some of the people making the claims seem to be telling the truth.
I remember a story told to me by a businessman, who runs a building company. He and his wife were watching a movie about UFO’s. The show was quite graphic and distrubing and they started to discuss alien abductions as they lay in bed after the movie.
Not much later that night, he said he woke his wife up after feeling very unseasy due to a light that penetrated their blind in a very strange manner. They initially wrote it off as a car, but on investigation, there were no cars coming toward the house. What he did see shocked him -  it was an orb of light that was hovering outside the window, and it was splaying light horizontally through the blinds like in a sci fi movie where machines are scanning a room for signs of life. After almost panicking, the couple decided to pray and not long after the light disappeared.
The most unnerving aspect was the fact that they felt they spoke it (or invoked something preexistant) into 'existence' because of the movie and it wasn’t a dream or their imaginations.
One argument I have regularly other researchers is simply the danger of investigating for the sake of it. Some people believe researchers who have multiple encounters of things no-one ever see’s are hoaxing it. And some of them are. But I also believe that the more someone pursues something supernatural, the more likely they are to experience a real event. They become open not only to suggestion but to a manifestation of the very thing they seek. This is the thing that drives researchers who look at things in a very methodical way insane - the metaphysical aspects that do not allow the subject to be observed, tested or are repeatable. And that's understandable.
My friends at the Ozcrypto forum would encourage us to look at this scientifically and with a great deal of skepticism  - and I agree. Like telling ourselves as children  there is a monster under the bed, the first cockroach to scurry across your hand as it dangles like bait will confirm that erroneous belief system – until mum or dad reveal the real culprit. Suggestion and experience do not equal truth and the null hypothesis has to be applied to determine nothing but cold hard facts which can be analysed.
And as Pastor Robin Swope would highlight, there can be great spiritual and psychological dangers for participants in investigations. You don’t need to be a psychologist to realise that a person who has mental health issues may be at high risk in a suggestive environment. And many Churches have unfortunately taken advantage of this by taking people through unnecessary exorcisms at great cost to someone who needed therapy and medication.
But even in light of taking a sceptical view, and great caution, there are enough cases to make you wonder whether our words and thoughts can connect with other beings, which respond by becoming the very thing we fear or envision.
I have my own opinions forming, and I’d like to hear yours.
God bless you, Pastor Baz.
Posted by Bryony