Real Life Stories: THE THING THAT SHOULD NOT BE

As I heard the panicked sound of the Cub Scout leader behind me wondering ’What it was that was thumping and growling at her’ behind the tree line, three kilometres from civilization at nine o’clock at night, I could not help but smile. Here we were, all sensible people, trying to get our kids out into nature and away from their pasty, lazy, pre-diabetic 21st century lifestyles and we had possibly walked straight into the territory of the one thing that most Australians would never believe in unless they had seen one – a large, hairy, up right walking, in some ways human like creature known as the Yowie.

Crazy isn’t it, that we spend all those years lying to our kids about Santa Claus, the Easter Bunny and the tooth fairy, yet at the first mention of ‘Yowie’ most people think you are a deranged lunatic who has just come off their medication.

Our society sniggers at the aboriginal legends – of course they are just the stuff of myth and fable. In our post-enlightenment era, sadly we modern humans know it all and the ‘primal savages’ of years gone by had to rely on gods and monsters of their imagining to have a crutch to lean on. Funnily enough, it’s generally the same reaction I get as a Christian minister in this very much post-Christian culture. Before I talk about the love of Christ, first I have to prove to the skeptical listener that he did not faint away, remove the stone and run off briskly to marry Mary Magdalene, pop out a brood of kids and start the Merovingian blood line. It’s the same with Cryptozoology. Before we discuss what it is, I have to discuss how I am not some insane zealot with an agenda to get them to buy my crutch and lean on it as well. Christian ministers and Cryptozoologist’s, I think, have one thing very much in common. No-one really cares about what we are peddling until they have an encounter with the object of our adoration/exploration themselves.

That actually wasn’t difficult after our recent bush walk with the Scouts. It had been twenty-three years since my ‘now wife’ and I saw a nine foot tall hairy man watching us from behind some houses being built backing onto the Grose Valley as nine or ten year old children. For me it was an almost unbearable twenty-three years of living in fear of what I knew dwelt in the bush. The quick dismissal of the story as fantasy by parents, adults and peers. The bad dreams and the night sweats. I can empathise with survivors of abuse, who cried out and no one believed them. I used to walk down those fire trails, become overwhelmed by anxiety and run from my abuser, who was lurking somewhere out there waiting for me.

I actually believed that 1982 would be my first and last encounter. In fact, I really hoped it would be. Maybe I had even questioned my own sanity until I found the Rex Gilroy and AYR sites. It was then that my worst fears came true. These things were bloody well everywhere and everyone including policeman, park rangers, business owners, aboriginals and house wives had seen, heard, smelt or even been manhandled by them. It ruined my plans to take my wife and four kids camping.


Even after I had been to the AYR website and taken note of the amount of sightings, I personally never thought that one man, especially me, could stumble upon this creature twice in a life time. Think about it for a second. We are talking about a nine foot tall, 300kg prehistoric creature that seems to possess the ability to speak into your mind at times, create fear and panic whilst being unseen, send the toughest dogs running back to their masters tail between their legs, give off a sulpherous odour and yet has never been captured. With all that in mind, I hoped never to meet this smelly, hairy, towering, diabolical beastie with red eyes and bad oral hygiene again.

After beaming with pride as my eight year old son was invested into the Cub Scouts about one kilometer down the bush trails at Waterfall/Helensburgh we continued to crash through the bush, torches beaming, children screaming, and me looking at my watch, as the clock almost struck nine, wondering how soon it was before I could get to bed.

Unfortunately at around 8.45pm the following occurred!!!

I was three from the back of the line, with one the Scout leaders at the rear to ensure no stragglers were left behind. The group was in single file along a narrow bush trail that followed a creek. It was a full moon and a clear night. We were at the bottom of the trail and we hit a palm fringed forest that burst over the track. My son was in front of me, my daughter 50 metres ahead.

The Scout leader at the back of the line abruptly pushed into us.

“There is something in the bush back there” She whispered harshly “I heard it thumping”.

“Oh yeah” I thought, probably a wallaby. Still, the first alarm bell went off – not many animals thump. And why would an experienced scout leader be worried about anything in the bush.

“Hawk is that you” she yelled into the scrub “are you playing a joke?”

Unfortunately, Hawk, the other Scout leader, was a couple of hundred metres ahead of us.

She fell back into the line. Her son, who was walking with her, ran ahead. I later found out he told my son he was very scared and that he heard something “Thump, thump, thump – on something three times” in the bush next to him.

The scout leader pushed up close to us again on the trail fringed tightly by palms...... “It’s growling at me”.

Stay calm, stay calm, I thought. We are deep in the bush and if it is a big fella, we are in Gods hands so just be cool Fonzie.

Suddenly a massive rock or branch was tossed against a tree, making a very loud noise on the same side the growling was coming from.

“Falling branch” cried a leader up the path.

Falling branch, yeah right, I thought. That was thrown with a lot of force from…that direction….I turned my torch to the north east ……and it meant keep walking troops. Three ticks.

The Scout leader behind me was getting rattled and her son started getting stomach cramps and a feeling of nausea and was soon back with us.

Then a smell, as strange as it sounds, like a wet dog that had rolled in Kangaroo poo and then put on Jovan Musk Cologne. It came in wafts three times like it was being emitted rather than walked into.

Four ticks. My pace picked up. I put my hand on my sons shoulder.

We came out of the palm forest, up a hill and onto the flats and open forest, with turpentine and gum trees that were sparse. At last we are safe now, I thought.

Then…whoosh… gut tightening fear, an overwhelming sense of being watched and the flight feeling that comes with anxiety. Just as I should have felt most safe, I now felt fear and wanted to get the kids out of there. Must keep walking. Must not fear or it will overtake me. Remember…the Psalms..”As I walk through the shadow of the valley of death……I will fear no evil.”

Five ticks and a line through the middle.

Well, to cut a long story short, we got back to our cars safely, gave a farewell dib and dob and talked about what a great hike it had been.
As soon as I got home I rang researcher Dean Harrison.

“Why are you laughing” I said, a little off put.

“Oh, there are a lot of reports from that area”.

“The palm forest at the bottom of the trail..” Dean replied abruptly.

“That’s where he always waits for them. Teenagers have been stirring him up for years. I told them to stop being nuff nuffs, but you know, teenagers….”

Bingo. The old man of the bush and we were on his turf.

So for the die hard skeptic (sometimes with good reason in a world full of 'con jobs') who subscribes to the “Not observable, repeatable or testable…not allowed to think about it or believe it” mentality of modern science to consider this - Could hundreds of sightings and encounters by normally sane people be off the mark – even though the same features, smells, sounds, behaviours and foot prints are reported over and over again. What are the chances of Dean picking the precise location before I finished my sentence? Why did a scout leader who has been to every bush trail in the area in both day and night and seen all the wildlife the region has to offer- panic - without even seeing the source of the sounds. I believe this – even the greatest skeptic will become a convert after an encounter with this ‘thing that should not be’ but like many of the great mysteries of the universe ‘simply is’. The bush is a wonderful and mysterious place just waiting for you to put your hiking boots on and find out what strange and exciting things await you around the next gully. The world would be a boring, sad and repetitive place without a little mystery for us to explore. Get out there today for tomorrow has it's own worries. 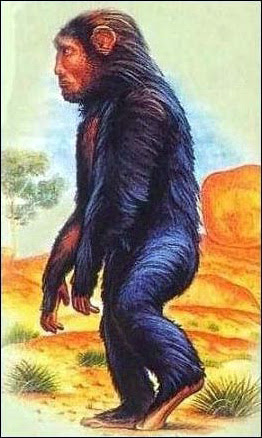