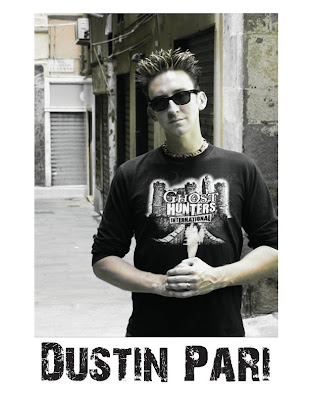 If you're a fan of Ghost Hunters, Ghost Hunters International or anything paranormal then you will have heard of Dustin Pari. Dustin has been on our TV screens for many years now showing his talents as a paranormal investigator. He's never been shy of sharing his faith in God and as a group we wanted to learn more about this faith and what keeps him going as a paranormal investigator.
Dustin, great to have you tuned into the land downunder for a moment. As a Christian group that investigates and collates stories on Cryptozoology and the Paranormal, it is great to learn that you are a man of strong faith.
How have you found being a Christian in a highly evangelical country with some fairly fixed views on demonology and being a 'ghost hunter'? Have some of your greatest supporters or critics been the Church?

Just like with many other faiths and walks of life- there are those who take things to the extreme and in doing so miss the point entirely.
I am fortunate enough to say that many in my own congregation support what I do and talk to me openly about it.  I actually have networked with quite a few Christians and even Priests within different branches of Catholicism who actively investigate the paranormal, along with members of other faiths as well.  And then of course we have what I like to call the "Super Christians" who, though they have little or no experience in this field, automatically can say that everything we are encountering is demonic.  I like to remind them of the numerous appearances made by Mother Mary and various other Saints.  Also it is fun to mention in the resurrection account of Jesus appearing to Thomas, that he tells him "I am not a ghost"- interesting choice of words for the Messiah if all we are dealing with are demonic forces.  Some counter this by trying to mention it could have been a translation issue and it means "spirit", to which I reply "and the difference is?".
Do you think Christians/Churches should have more or less involvement in the paranormal?
Involvement in this field is a personal thing and unfortunately a blanket answer is not suitable.  I can say that I would like to see more involvement on behalf of the Catholic Church or at least some support.  There are certain ancient texts and such that could be of help in dealing with demonic forces if only they would put them out there for the public to peruse.

How did you become a Christian?
I was born and raised a Christian and attended a Roman Catholic church and elementary school.  Like most teenagers, I went through a  period of spiritual growth, questioning and self discovery.  I dare say that during most of my tenure in Catholic high school I would have considered myself an athiest.  I did explore various spiritual understandings, dabbling in Eastern Thought, Buddhism and Taoism.  At the end of the day, there were some good principles, but nothing that I hadn't already heard in a different way while growing up Catholic.

It wasn't until my mid to late twenties that I started looking for serious answers in regards to religion- up to that point I just tried to lead a good life- but was troubled at times by not feeling that I had the understanding I needed to pull myself out of the fire when the chips were down.  I awoke one morning to Church bells and decided to give it another try.  Once again I shopped around first- I went to Baptist churches,  I went back to my old Church, and then I went to a few more.  I was about to give up- once again feeling frustrated by the overwhelming feeling that most of the Churches were more focused on attendance rates and income than about the real message.  It appeared the new version of easy going Catholocism, or Catholic-Light as many call it, was here to stay; Preaching a softer message and straying from the scriptures in an attempt to be more pleasing to everyone.

I gave it one more shot when I saw advertised in the newspaper a local Church labeled a National Catholic parish.
From day one it seemed like the perfect fit and it has proven to be my spiritual home that I had long searched for.

I think that certain people are more attracted to certain aspects of the faith- regardless of what those are or where they worship, I am just glad to be a part of it all and hope that everyone continues to live their lives in positive and encouraging ways that hearken to the teachings of Christ.

In your experience do all dead people go straight to heaven or await judgement and if not a) why do we think they do if the evidence suggests otherwise; and b) what have you found has happened to some of them ie why do they hang around; and c) how can you (as an investigator) be sure they aren't spiritual imposters (ie demons)?
I think that Heaven isn't as far away as people think and that a lot of these encounters which we would label as "Intelligent Hauntings" (Meaning they interact with us and were once people like we are) are actually just those who have passed on checking in on us.

I think the ones that are lingering may be weary of judgment or simply aren't ready to come to terms with the situation.  Personally, when the good Lord calls me home, don't bother doing an EVP sessions looking for me- I am outta here.

The demonic inhumans that are here with us can be tricky- its in there nature, but there are signs you can look for- and follow up questions and such that you can hope to trip them up with.


How do you feel God protects you in the field and what sort of processes or prayers do you go through and when do you use them?
I walk through all aspects of my life in faith, not in fear.  So whether its investigating or anything else I am doing, I don't worry about it much.  I take precautions of course, but I don't have any lingering doubts.  I have a ritual of prayers which are said daily, and on investigation nights I often add in a prayer to St Michael the Archangel upon returning home.


What 'hairs you out' - what are the experiences and when are the times you think 'I wanna go home, watch TV and have a cup of hot cocoa'?
There is nothing that has made me want to head for the hills.  I have had moments where I have to gather my thoughts, grab some fresh air and then head back at it.  I am not a huge fan of those long dark hallways lined with doorways like in prisons and such- those keep me on edge.  I don't like things popping out at me- I can deal with it, but I don't have to like it.


You must have a great story Dustin, how the heck did you get involved in this 'industry'?
My first encounter was with what we classify as a shadow figure.  I was about 8 and had seen it looming in my bedroom doorway.  It scared the life out of me, and being a good little Christian school boy, I tucked my head under my sheets and prayed for the thing to go away.  It did, and I never saw it again in the remaining 10 years I lived there.  However it left its mark on me as my curiosity was piqued and would not be satisfied until I had found answers; And, so, the quest began.


Would you encourage people to become "ghost hunters" or do you think its a special calling?
I wouldn't go so far as to call it a "special" calling- most of us are rather ordinary people for sure.  However if anyone does have an interest in their life or something they want to pursue, they should do it.


Okay. Off topic now. This last question is from Pastor Baz who's son plays Rugby League.
Do you ever watch Rugby League Football and do you think our men down under are tougher than American Football players, considering we don't wear helmets and body armour and still charge each other in a bone crunching fashion? ;-)
Ummm...  its a matter of perspective I suppose - and my perspective is that its best not to answer.
Good answer Dustin ;) always best to be diplomatic ;)
Thank you so much for taking the time out to answer these questions and we pray the Lord will bless you.
You can find Dustin on his website www.paranormalrockstar.com or Facebook or his Twitter page.
Posted by Bryony