Before I was a Pastor I was an executive in a Pharmacy group. The head office was only a kilometre from my house so I would often walk to and from work. I worked there for around fifteen years, going from a delivery boy in a store as a teenager up to general manager as we created a new brand and later sideways to retail operations manager when I realised that I was much better at retail layouts, advertising and dealing with people than large scale administration - and thankfully my colleagues agreed!! Then when I became a Christian in 2000 a lot of things changed for me - including seeing more of what was going on in the spiritual realm. This was at times quite frightening.

One night I was the last out of the office and to walk home I had to cross a small footbridge over a creek that my kids named 'Mullet Creek' because of the baby mullet that come in from the bay and frequented the creek. Our kids used to drop bait traps in and catch the 'poddy mullet' as bait for beach fishing. It was now dark and as I crossed the bridge a noise echoed up the creek as clear as anything. It was the word "Barry" in a very raspy and loud voice. Now, I realise I was 28 years old and wearing a suit, but I ran all the way home, that's how badly it freaked me out hearing my name yelled. I felt it wasn't my imagination, the sound had actually echoed up the creek toward me.
I got home, debriefed it with my wife, decided after a while that it may have been my imagination after all, as the other option was too awful too comprehend and dropped it. I walked home many nights across that bridge and never experienced anything strange.

Four years later on one bright, sunny morning with beautiful clear skies, I found myself walking to work and as I approached the bridge I leaned over the wire fence to check out the mullet I could see in a shoal. Then I heard the words "Why don't you throw yourself in".

I looked up, and on the other side of the bridge were two men, in black robes like coal bags. They formed a hood at the top. Their skin was pale and they had sores on their faces. They stared at me and said nothing more. 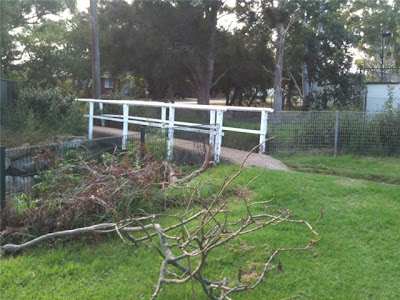 Now I was in a suit, with a briefcase on the way to work. This was the last thing I ever expected. But I felt that these were not 'real' people so to speak and so in reaction I just yelled across the bridge "In the name of Jesus of Nazareth leave". And they did, they both vanished into thin air.

I had to go straight from that situation into a meeting to set up a deal with Coca Cola for our 45 stores - what an interesting juxtaposition of experiences within minutes of each other. The natural and the supernatural seamlessly cross paths during our daily grind.

So to assess the experience: Was I hallucinating? Was the voice I heard all in my imagination? Do I need psychiatric help?

Possibly - for a healthy skeptical approach these things need to be considered. We always cover those bases in our investigations and when dealing with people and my own personal cases need to be measured by the same protocols.

Or did I encounter what many people would describe as a demonic force? If they were indeed real, their agenda would have to be considered hostile and specifically targeted.

I have walked that bridge almost every day since, and as yet have never experienced anything else strange. But I personally attribute that to the power of Jesus Christ in having authority over the spirit realm. For the rest of our readers, you will have to take it with a grain of salt and put it on the shelf of a possible encounter with the spiritual realm or the power of the human mind playing tricks.

See you next week,