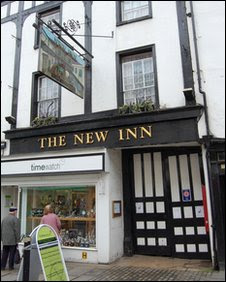 "A catalogue of unexplained activity at a Gloucester pub has prompted the Gloucester Active Paranormal Society to investigate.
It's claimed that a series of unexplained happenings have occurred at The New Inn in the space of a week, including the sound of ghostly footsteps, rattling doors and even a pint of beer mysteriously lifting itself off a table and on to the floor."
To read more click here
Posted by Bryony