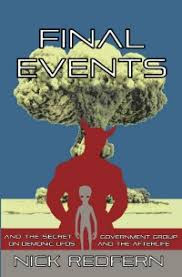 For around six months now Nick Redfern has been my favourite secular author on the Paranormal. He and I do not share the same worldview or religious beliefs but that does not mean that he is not encountering what I personally believe are many realities in his research. I like the fact that he does his research in a very hands on manner - dangerously so at times (Such as in '3 Men Seeking Monsters' and 'There's Something In The Woods') when he is involved in invoking the beings of old to get them to manifest – but this method seems to grant him access to glimpses of the ‘other realm invading ours’ which support the biblical view of dark forces operating behind the scenes in our world. He speaks about the 'psychic backlash' that follows these invocations, which I would describe as 'demonic oppression or attack'.
Unlike ‘3 Men Seeking Monsters’  which is a rollicking ride across England with two mates encountering all sorts of creatures, witches and strange experiences and 'Memoirs of a Monster Hunte'r which was a slower and more stilted American version of ‘..Seeking Monsters’ Final Events comes across as a brilliant piece of research. The fact that Redfern allows his subjects to speak openly on a subject without constantly adding his personal interpretation apart from unpacking the facts and links he is discovering shows he is a masterful interviewer and professional in the way he conducts research. This is made more apparent when he was labelled as a ‘Christian Fundamentalist on a blog and ended up defending himself as an ‘athiest’. That was the degree of his neutrality in his fact finding, even when the ending (spoiler alert) ends up as a warning about certain aspects of Christianity.
The summary of the book is that a semi secret group called the Collins Elite were formed as a paramilitary investigative group around the time of the first major UFO flaps after world war 2 to investigate the possibility that Non Human Entities are not only not benevolent aliens from another world but actually demonic forces that will push earth to the brink of Armageddon – but not before they lead the world into a lie that will ensure most humans go to hell. The book looks at the possibility that Aleister Crowley and a number of his disciples deliberately opened the door to another world that allowed the 20th Century UFO/Alien phenomenon to become part of modern folklore. He looks closely at alien abductions, Psy-ops, the rise of American fundamentalism and discloses that project blue beam, if it exists may not be what it is portrayed as but something far worse than we ever imagined.
Men in black, government and NHE’s working together, Faux organisms like the Golum of Hebrew mythology, projected thoughts of Armageddon into the minds of abductee’s and the ushering in of the antichrist by the very people who claim to want to save Christianity by force – it’s a disturbing read on many levels but utterly fascinating.
Pure conspiracy theory or an uncovering of the facts as we may have never known it? You’ll never watch Close Encounters or ET the same way again as the idea of an ET being benevolent dissolves with each page you turn and a demonic reality driven by satan becomes clear.. Redfern’s book is highly accessible and rather than a regurgitation of others writings is a coal face collection of interviews and tales that weave together into macabre web.
My suggestion – buy it, read it and post your own review.
Pastor Baz.
Posted by Bryony